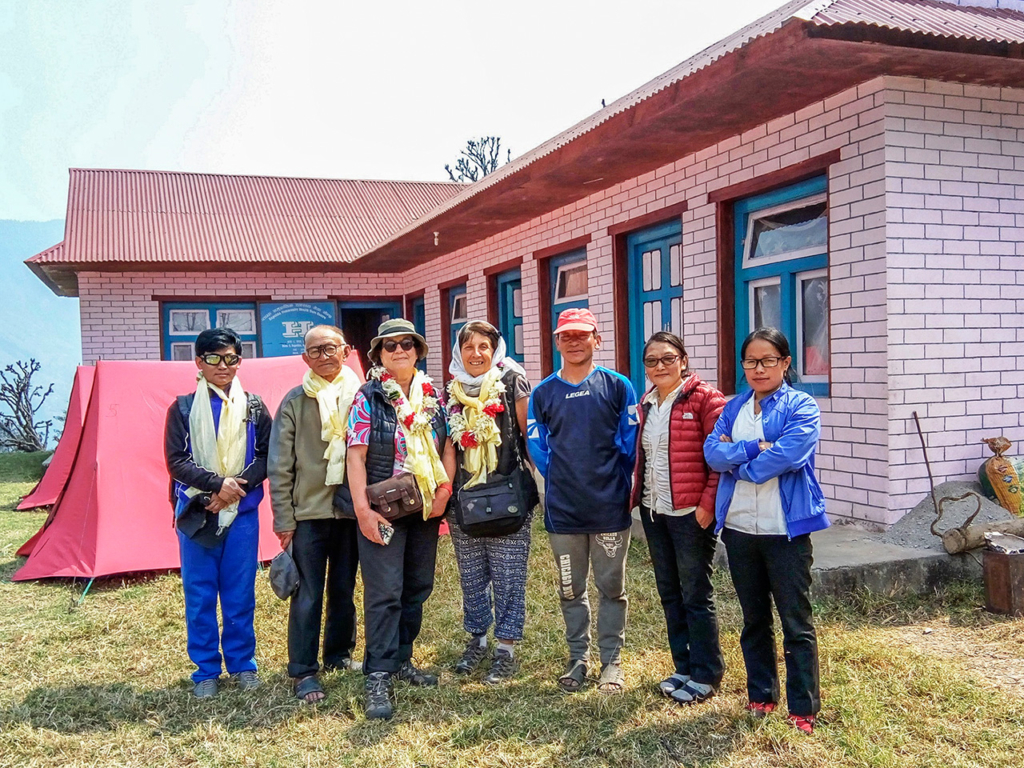 This particular trip was taken by current ANUVAM Chair Evelyne PICHENOT and Member Monique BOUTRAND accompanied by FEILSS Chair Pancha Kumar RAI and Secretary Yadav Kumar RAI. FEILSS treasurer Jase Rai was partially present during this trip.
During the stay in Rapchha, many meetings have been attended and below is the summery of the important meetings.

A proper gratitude was exchanged between Mrs. PICHENOT, Mrs. BOUTRAND, Mr. MAGAR and FEILSS representatives for the good collaboration for the last many years in a common goal of improving the living standard of Rapchha people.

Now a government official and Ward 2 (whole of Rapchha) Chair, Mr. Magar has his set of priorities for the next 5 years and they are: communication (mobile phone tower), drinking water, health, education, agriculture, promotion of tourism and expansion of branch roads throughout Rapchha. He also explained, sharing similar views of the community people, that communication is his highest priority. But this was also one of the most challenging priorities given the fact that the only two organizations (one government owned and one private) that provide mobile telephone service are often hard to convince that it is profitable for them (the users are not big in number) to invest in the areas to build infrastructure to make mobile network/service available.
In course of discussing the current project of earthquake resistant house, Mrs. PICHENOT inquired about if it is possible to have necessary wood to build the house ready in advance. On this, Mr. Magar replied that this is possible but a part of fund going to the family should be made available in advance so that they can pay for the cutting and transportation of the wood.
A suggestion was also made by Mrs. PICHENOT about revising the budget for building earthquake resistant house as to keep the cost more realistic with the progress of time. A new cost estimation is so being prepared consulting the senior masons and carpenters like Jorbir Rai (Senior carpenter), Ganesh Magar (Senior mason) including Jas Bahadur Rai (Senior Mason/Carpenter), Dil Bahadur Magar (Senior carpenter). When ready, this document will be made available to ANUVAM. 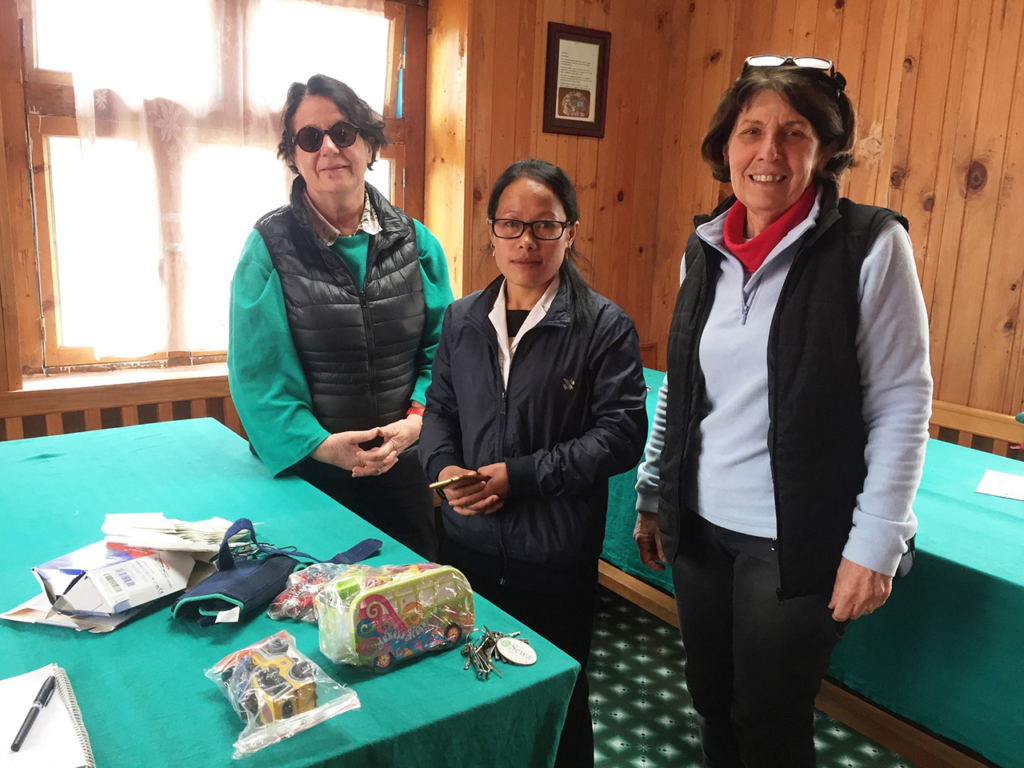 They also informed that the government salary scale for a Health Assistant is around 35 thousand rupees per month but it is possible to find one who is fresh graduate and is willing to work at around 25 thousand rupees per month as a fresh graduate.
Upon asking, Suku informed that in average 3 pregnant women come to the healthpost to deliver baby each month though this number is not consistent. Patients from areas like Kharikhola, Juving, Takshindu, Wapsa or Damku come to this healthpost as they get better medicine in cheaper cost. And they (Suku and Man Maya) go visit schools in Rapchha to give hygiene awareness class when they are requested to do this.
Currently, the healthpost is stocked with enough medicine but will request with ANUVAM for more when it gets low on it.

Until few months ago, the priority of Bodu school was an extra school building for more classrooMrs. Then a German group recently helped this school with a new building with three classrooms plus a new toilet building. In the given context, the Headmistress of the school Lila Karki suggested ANUVAM consider gifting the school with a building for Teachers’ Living Quarter instead.
The request for Teachers’ Living Quarter was understandable but it came as a surprise to both Mrs. PICHENOT and FEILSS members. The school staffs could certainly justify their request but we also consulted with Ward 2 Chair Mr. Magar about the validity of this new request. In my recent trip, I had one more meeting with the school staffs and they told me that the Teachers’ Quarter is still their priority.
A genuinely plausible request made this time was a request for a 1000 liter readymade water tank. If we give the school this tank, the tank can be filled during the night from a newly constructed water tap and so there is plenty water to use in three toilets during the school hour. If ANUVAM permits, we would like to fulfill this request as it certainly makes a good sense to do it.

Kumarraj Shrestha, some of the school teachers, former School Management Committee Chair Anand Rai and current Chair Jase Rai were present at this meeting.
The meeting was also a great flashback via Mrs. PICHENOT’s photos relating to the school which she tool almost two decades ago and shared with present members at this meeting.
In this meeting, at core of the conversation was the Science teachers’ salary that ANUVAM had been paying for last one and half decade or even more. Mr. Shrestha and all present at the meeting were grateful to ANUVAM for this and all other supports the school had been getting from ANUVAM.
We have been hoping to have made some arrangements from the government to pay for the science teacher for the last many years but without any success. During the meeting, Mr. Shrestha officially requested with ANUVAM via Mrs. PICHENOT and Mrs. BOUTRAND about if the association could continue supporting with the salary for at least one or two more years. In the meantime, the principal and School Management Committee and the leaders of the community will continue looking into possibilities about getting the Nepal government to pay the salary of science teacher the soonest possible. 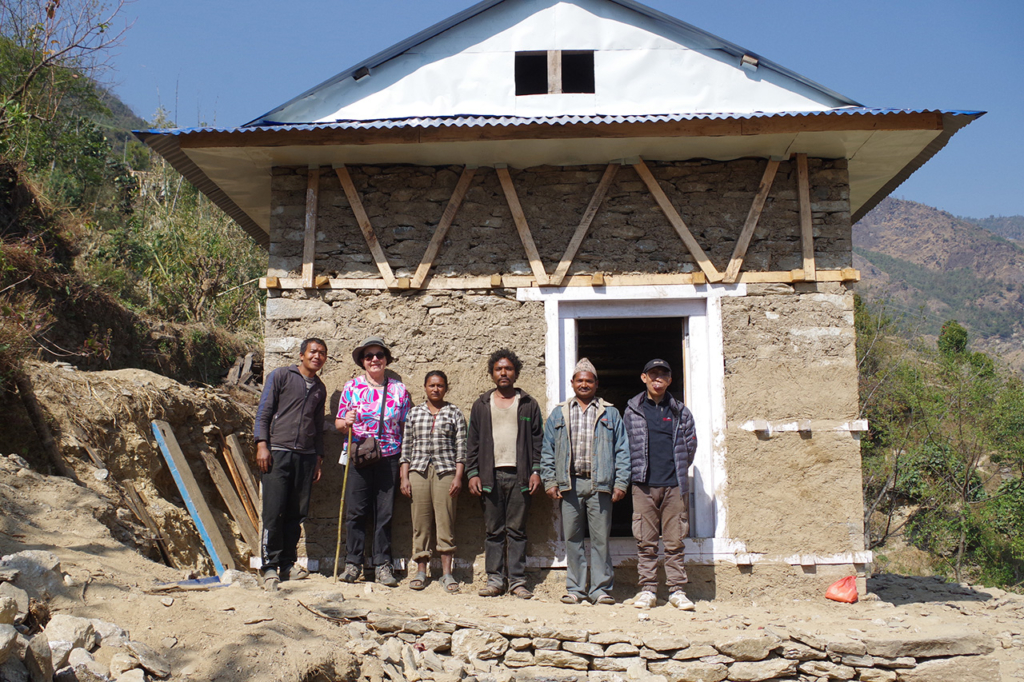 A big thanks to Lal Bahadur Nepali who provided free land for the construction of this house. He also provided a considerable size of land where the family could plant some crops and vegetables.
The construction site was visited by Mrs. PICHENOT and Mrs. BOUTRAND when the house was close to its completion.

With the possibility of continuing the earthquake resistant house construction for more (selected) families in Rapchha, a cost revision was suggested by Mrs. PICHENOT. Senior carpenters and masons who know our earthquake resistant model are currently working on preparing a detailed cost estimation, and as soon as this document is ready, we will make it available to ANUVAM. 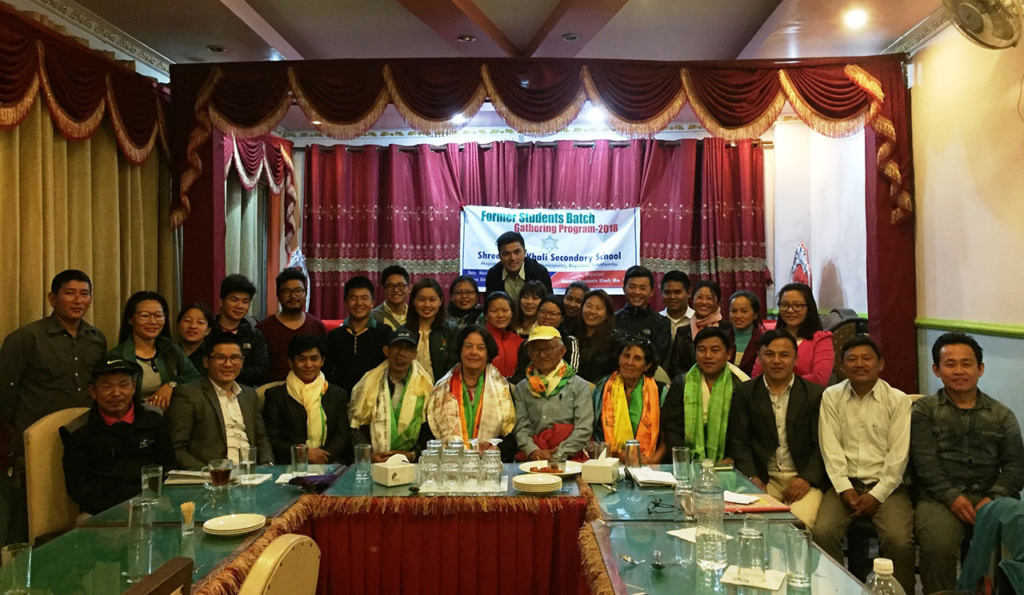 A meeting was organized in Kathmandu with the purpose to introduce Mrs. PICHENOT and Mrs. BOUTRAND, and ANUVAM via them to the former graduate students from Shree Basakhali Secondary School who are now living in Kathmandu engaging on various sectors in terms of their profession.
FEILSS chair Pancha Kumar Rai, treasurer Jase Rai, member Panche Rai, one of the coordinator with foreign (German) group Sat Bahadur Rai were some of the invitees among around more than two dozens of graduates.

This meeting gave the graduates a better understanding of since when and how ANUVAM has been involved in Rapchha though many of them had already known and seen all the great works the association has been doing for the community last over two decades.
Current chair of Former Students Association Arjun Rai and FEILSS member Panche Rai formally thanked Mrs. PICHENOT and Mrs. BOUTRAND and ANUVAM for the help to the community whereas Mrs. PICHENOT gave a brief and very interesting history of how ANUVAM was actually formed and how it started working in Rapchha in the early days. Mrs. PICHENOT and ANUVAM was greatly applauded for all the good work already accomplished in Rapchha, and many of the similar works going to be accomplished in future.
– – – End of Report – – –